Last week, I received a package from Amazon containing my new smart watch (Moto 360 2nd gen). Purchasing a smartwatch was on my mind since Google released the 1st generation of the Moto 360 back in September 2014, but I kept on waiting. Two months ago I started comparing reviews of the available Android wears; the competition was mainly between Huawei Watch and Moto 360 2nd gen. I chose the later for one reason only, the diameter size! I thought the 42mm diameter would be a bit small!

Initially, I wanted to buy the black watch (bezel, case and band) that would have looked like this: 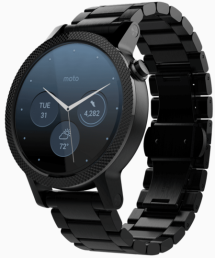 But I didn’t manage to do that due to unavailability on Amazon-FR, and since I don’t live in the U.S, it becomes harder to have it shipped from the Motorolla website. So I ended up buying the silver watch with a brown leather band (check featured image). Well, it didn’t turn out to be a bad thing after all! The combination of silver and brown color looks elegant and beautiful, plus, you can easily buy and change those bands later.

I bought the watch because I want to get into the field of Android development (phone & wear), so, I will be leaving my detailed reviews for later blogs after digging into its details.

Almost a year ago, I bought the Fitbit HR to track my activity. I used to wear it on my right hand with my Tissot watch on the left, well that looked ridiculous!! 🙂 Now, the Moto 360 will replace both devices. But before taking the Fitbit off, I will be comparing the data collected from both devices since they both has some smart features in common. That will be the content of my next blog!